The architect and designer Sophie Dries has collaborated with the Roman Gallery Giustini - Stagetti, on the reinterpretation of the Roman column.In line with her previous work on the manual coloring of travertine (MARBLE SHADES) a typical Roman stone, Sophie Dries has developed a POLYCHROMA COLUMNA.Inspired by the ionic, doric and corinthian series, Sophie Dries mixed the pure form of the circle which encounters the triangle and played between fluted and other smooth and polished surfaces. 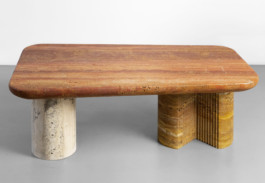